View source
While this was an... unexpected deviation, this diversion gives us the opportunity to confirm our neighbor's strength. We are all in this together, after all.
- The Magister before beginning the stage

Zao Land is the 6th Stage in Freedom Planet 2, being Part 2 of the Battlesphere Arc. It is an amusement park located in Shang Mu, and is based on Mayor Zao, who is also likely the park mascot.

Lilac, Milla & Lady Neera arrive in Shang Mu as they continue to follow Carol to the Battlesphere, where they intend to win the Arena's GRAND PRIZE and recruit Captain Kalaw to help defend Shang Tu. The quickest route to their destination is through the various rides and attractions of Zao Land, where enemy robots await.

The stage utilizes several amusement park attractions in the track such as balloons, spinning tea cups and targets set in the style of whack-a-mole. Other gimmicks include rollercoaster rails that the player can grind on and large baseballs that they can ride on after being swung by a giant bat.

Icon of Bossball, seen in the TV Monitor firing Baseballs at our Heroes.

After the boss is defeated, it splits into three lesser versions. Eachother's thrown baseballs can damage one another.

Lilac grinding on a rollercoaster rail in Zao Land

Carol grinding on another rollercoaster rail in Zao Land 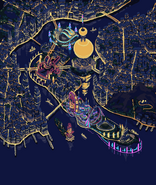