Alejandro Saab
"I know you feel a little jealous, but I can't help if my city's a little bigger then yours!"
- Zao, showing his resolve of Shang Mu

Zao is the Mayor of Shang Mu, elected some time before the events of Freedom Planet.

Zao is a Red Panda, whose fur color is a reddish-brown and white with green eyes and a height shorter compared to other Avalicians. He wears a royal outfit in the nation's colors, red and yellow, which likely resemble Fire Dragons. Zao also wears a large hat in the shape of an air balloon, with a crown placed in the middle and two red jewels with gold edges placed above on both sides.

Zao is known for his charisma that, along with a rigged democratic rule, lead him to become Shang Mu's Mayor. He is shown to be greedy, as he'll take any opportunity to ensure his chances for re-election. It is also shown that Zao like to be, or wants to be famous.

"It gone! My on chance for re-election is gone!"
- Zao, watching the Shuigang Airships flee with the Kingdon Stone.

Theft of the Kingdom Stone

Not soon after Lord Brevon's attack on Shuigang, Zao is met by a growing energy crisis in Shang Mu (possibly caused by Brevon himself). Desperate to take serious action for the sake of his city and to better his chances for re-election, Zao hires Spade and the Red Scarves to steal the Kingdom Stone, while sending his Soldiers in disguise to pillage the Ancient Temple as a means to distract Shang Tu. The next day, a brainwashed Prince Dail, who believed that it was Zao who ordered his father's assassination and had taken the Kingdom Stone, invades Shang Mu with his Sky Battalion, successfully stealing the Kingdom Stone with help from Serpentine.

After Shuigang's forces escape Shang Mu with the Kingdom Stone, Zao is furious, knowing that his one chance for re-election was gone. Afterwards, he sees Lilac and her friends, who had just destroyed a wretched mechanical beast. Grateful for their heroics, he invites them to a royal feast at City Hall and to discuss the Kingdom Stone. Eventually, he was convinced to let them negotiate with Shuigang for the Stone, providing the team with his last Airship still intact from the attack. However, the following morning, Dail and his Sky Battalion attacks the Airship while it was en route. Lilac and co. managed to repel the attack, but the Airship suffered too much damage, forcing them to splash down into a river leading them to Shang Tu.

The Seal of the Dragon

Later on, Zao prepares to lead his army to attack Shuigang in order to reclaim the Kingdom Stone. However, when they arrived at the Snowfields, they are met by General Gong, along with Carol, Milla, Torque and the Shang Tu army. Before they start talking, Milla helps Zao by digging up snow pile for him stand on, so he and Gong can talk face-to-face. As the two argue about who should gets the Kingdom Stone's power, they prepare to wage war with each other, despite Torque's efforts to convince them otherwise. Suddenly, they are interrupted by loud roar, and a large Dragon flies in, prompting Gong to tell everyone to kneel before the ancient beast. After being ordered by the Dragon to work together, the two armies agreed to unite against Brevon. As the Dragon flies away, Lilac, who was riding on the Dragon, appears and is happily reunited with her friends. After she introduces Pangu and explains that they have the Magister's full support, Gong then rallies both armies by stating that they've been blessed with the Seal of the Dragon, while Zao attempt to take full leadership, much to Gong's disapproving look.

Assault on the Dreadnought

The group gathers around a campfire outside a recently built tent to form a plan of attack on the Dreadnought. Zao asks how there going to recover the Kingdom Stone, Torque suggested using one of his hacking devices to disable the Dreadnought's power. With that ,the two armies began to cross the Snowfields to the Dreadnought. As Lilac rides the Holodragon, Zao provides Carol, Milla & Torque with three of his tanks, which they use to lead the charge against Brevon's Army. Later on, as Lilac and co. board the Dreadnought as it takes off, Zao and Gong lead their armies to liberate Shuigang from Brevon's Army, eventually freeing the city from the Warlord's grip.

Brevon is defeated, but the Kingdom Stone was destroyed along with the doomed Dreadnought. However, when all hope seemed lost, the Stone transformed into a Crystalline Vortex that had begun to spread unlimited energy across Avalice. Zao invites the girls, Torque, Gong & Neera to a royal feast in celebration of their victory over Brevon and the end of the war. He's also relieved that the energy crisis in Shang Mu was averted and his chances for re-election were likely increased.

Zao is likely to be capable of military leadership, leading his troops to attack Shuigang, and the fact that his city is full of hazardous robots.

While most likely meant as a comic relief, Zao is also able to emphasize certain sentences that he says by adding a "+5" based on what he says, then display it in flashing letters over his head. This is shown in the following scenes:

One of many Mayor Zao statues placed around Shang Mu. 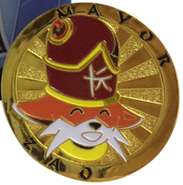 Mayor Zao's introduction at the Battlesphere in Freedom Planet 2.
Add a photo to this gallery
Retrieved from "https://freedomplanet.fandom.com/wiki/Zao?oldid=19805"
Community content is available under CC-BY-SA unless otherwise noted.