View source
My friends! We have been blessed with the seal of the dragon! We must heed it's call, and join together for the greater good!
- Gong, rallying the Armies of Shang Tu and Shang Mu against Lord Brevon

The Soldiers are recurring characters in the Freedom Planet Series. They are the Avalicians who serve and protect the Kingdoms of Avalice.

The Soldiers of Shang Tu serves the Royal Magister, also acting as the Kingdom's Police Department. In Freedom Planet, they mostly wore blue armor with face plate and riot shields. Their helmets also sported fish fins, as they were likely based off of Water Dragons.

The Soldiers of Shang Mu serves Mayor Zao, who also leads them into battle. In Freedom Planet, they wore red armor with a light blue visor and wield a blaster and a dagger.

The Soldiers of Shuigang served the Former Ruler of said Kingdom before his death, and then his son Dail, who at the time, was brainwashed by Lord Brevon. In Freedom Planet, their armor and weapons were the same as the Shang Mu Soldiers, but colored green.

The Soldiers of Parusa hail from the Southern Islands, where they protect and serve the city of Parusa, which may also be the Capital of said Islands. It is currently unknown who the Soldiers are lead by.

Back View of a Shuigang Soldier, seen during Prince Dail's Speech. 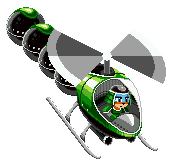 A Shuigang Soldier flying a Chopper