The Shade Elite are a part of Lord Brevon's army, serving as an infantry unit, often led into battle by said Warlord and Serpentine. They first appear in the opening cutscene of Freedom Planet, being deployed from the Absolution to attack the Soldiers in Shuigang Palace and following Brevon as he confronted the King, appearing in several cutscenes afterwards.

The Shade Elites are creatures that have a single Shade Core encased in mechanical battle suits, each armed with an Energy Rifle. They attack every few seconds by crouching and firing four shots from their rifles, which can be deflected by Milla's Shield.

The Player first encounters the Shade Elites in Jade Creek, being deployed from Serpentine's Gunship. Later on, in Thermal Base, Battle Glacier and Final Dreadnought 1-4, the Shade Elites will teleport in on teleport pads as the Player comes within a certain distance. They will follow the Player as far as they can reach until they are either defeated or the Player continues to the next area. If a Shade Elite takes a certain amount of damage, it will fall over and cannot be damaged between falling down and standing back up, but will be defeated once they take the same amount of damage again. If playing as Carol in Jade Creek, any Shade Elite she defeats will drop a Fuel Tank so that she can use her Motorcycle to make it easier for her to attack Serpentine's Gunship.

Care should be taken, for the Shade Elites are not too weak individually, and they are very dangerous in large numbers, even for Lilac.

Wall Pusher is the nickname for a Shade Elite who acts as a Mini-Boss in Thermal Base. It will try to push the Player into a lava stream using a movable wall. The Player must attack the wall to push the Shade Elite into a detonator that is placed behind it. Using Lilac's Hair Whip, Carol's Claw Combo or Milla's Shield Burst to push the wall into the detonator is the only way to defeat it. Once contact is made, the detonator will explode, destroying the Wall Pusher. The wall will then transform into Crystal Shards, allowing the Player to proceed. 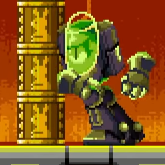 The Wall Pusher Mini-Boss encountered in Thermal Base

Older variation of a Shade Elite.
Add a photo to this gallery
Retrieved from "https://freedomplanet.fandom.com/wiki/Shade_Elite?oldid=18566"
Community content is available under CC-BY-SA unless otherwise noted.