Sabrina DiDuro, more commonly known as Strife and formerly known as Stephen, is the head of GalaxyTrail, the independent gaming company behind the creation of Freedom Planet and its upcoming Sequel, Freedom Planet 2. She is also the voice of the Bird Officer in both games.

Sabrina DiDuro was born on the 22nd of June 1988. After graduating from high school in 2007, she attended the Finger Lakes Community College with a major in Computer Science. There, Sabrina enlisted in the Fundamentals of Game Design course and graduated in 2009.[1]

One of her first contributions to any video game was as a composer for a few tracks found in the game Chex Quest 3.[2] In 2009, Sabrina and her wife registered the domain galaxytrail.com, which at the time, was used for various things.

The subaddress galaxytrail.com/games then served as Sabrina's video game portfolio. At that time, she also offered commissions. An example of her contributions during 2011 was as a graphic artist for the Xbox Live Arcade game That Really Hot Chick, made by HorrendousGames.[2]

The following message from Strife can be located within the instruction manual of Freedom Planet:

LETTER FROM THE DEVELOPER

"It was July 21st 2014. I had spent most of the day at my sister's house babysitting my toddler niece, and after she came home from work, I decided to spend the evening there ahead of the big moment. It still seemed unreal to us that we had a finished game in our hands, especially since it seemed so far from completion even just a week ago. Our original release date on the 19th had to be pushed back a few days because of a weekend launch not being possible on Steam - the storefront where we would be releasing - but we were honestly thankful for the extra couple of days to make sure everything was ready. With the rest of the team cheering me on in the Skype groups we had settled in for the past two years, I pushed the proverbial - and literal, in the case of Steam-works - big green launch button. Within five minutes, we were seeing an avalanche of comments and screenshots that we didn't expect. Plenty of bug reports too, of course! I would spend the rest of the evening polishing things up further for a day one patch, but aside from that, I remember just leaning back in the dining room chair at my sister's place and feeling a wave of relief, as if I had just taken off a heavy pair of shoulder pads after wearing them for days. Freedom Planet was released.

There are a few big moments in my time working with the game that I still freshly remember. That very first launch on Steam, the first time I held the Wii U™ Gamepad and saw our game's icon in the Nintendo eShop, the first time I logged into the store on my Sony PlayStation 4 and was able to search for our game by name, and the first time we went to a convention and finally got to meet our fans in person. These were all things I had wondered about since I was a little kid. Something else I wondered about was the possibility that someday we would see a game that we created on actual store shelves alongside other games. I'm still not sure when that will happen, but honestly, the idea that this manual you're holding is inside a game case that's part of a collection of retail games on your shelf feels just as exciting to me, and it certainly wouldn't have been possible without the passion and devotion that our fans have for our speedy little platformer. Thank you for giving us a chance to express ourselves." 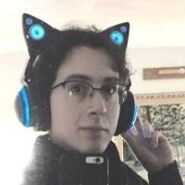 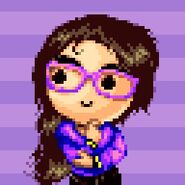 With her dog Sammy DiDuro 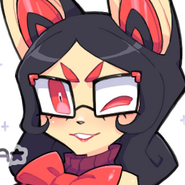 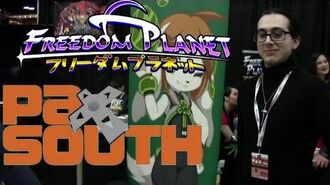