View source
"We have to talk to you. The Kingdom Stone is in danger!"
- Lilac, warning Gong of a Theft Plot

Relic Maze is the 2nd stage in Freedom Planet. It is the ruins of an Ancient Temple located within the Valley Region near Shang Tu. The Kingdom Stone is kept here within a Shrine, under the protection of a Guardian.

Lilac & Carol goes to the Ancient Temple after Torque warns them about a plot to steal the Kingdom Stone. Upon arriving, the Temple is ambushed Shang Mu's Forces, and they race to save the Stone before its stolen.

Milla's playdate with Mr. Stumpy is interrupted by a Shang Mu Truck recklessly driving by. She then notices a Purple Dragon Girl (Lilac) running after the truck, and follows her with the intention of meeting a Dragon.

A fairly straightforward area with only a few enemies to worry about. There are also conveyor platforms that the Player can use to get to certain areas. Just watch out for the spiked balls rolling along the slopes as you go. At the end, there are two blockades that can only be removed when certain conditions are met in rooms that correspond with each blockade.

In this room, the Player must head into the bottom of the temple, fighting Irises as they make their way down to press three switches to turn off the first blockade. At first, only one path is accessible, but after one switch is pressed, the path will change, leading to the next switch. Once all switches are pressed, the Player can go back to the bar they grabbed and hung onto on the way down from a different direction to return to the previous Area, where they discover the first blockade has disappeared.

This room has the Player pressing different switches as they make their way to the top of the temple, where they'll fight the Eye Golem. This Mini-Boss is easily dealt with; just push a block on top of its eye to destroy it instantly (doing this will earn the Player the Push Block KO Badge), and watch out for the fire it shoots and the poison bubbles it drops. Once it's destroyed, the second blockade will be removed.

If playing as Lilac or Carol in this area, the Player will approach a large yellow gemstone. All of a sudden, a mechanical Claw appears out of nowhere and snatches the gem right in front of them. The Player then pursues the Claw until they run off a cliff, landing right on top of the Shang Mu Truck. Once landing on the Truck, the Player must make their way to the front of the truck, either from the tops of the box cars or by running along the ground at the wheels' level. At the front of the truck, they'll come face to face with the Truck's Claw, and then move on to destroy the Truck's engine. The Player can skip this Mid-Boss by running on the ground and just destroying the switch to disable the truck and defeating its claw at the same time instantly (this will earn the Player the Claw Bypass Badge, recommend using Lilac).

If playing as Milla in this area, the normal path will be blocked off by rubble, due to the Claw collapsing the path after stealing the gemstone. Instead, the Player will head down a hole under where the gem was. There, they will find a mine cart, which will take them to the crystal caverns. Be aware of spiked floors along the track, since the Player can jump off the cart even when it's in motion.

After disabling the Shang Mu Truck as Lilac or Carol (or finished riding the mine cart as Milla), the Player heads down into the crystal caverns below the temple, with just a few more enemies, traps, and other hazards.

The Player continues to explores the caverns, fighting more enemies and avoiding more traps and hazards as they make their way to the door.

This is a very short area, containing a few easily dispatched enemies and two more blockades that once again can only be opened when certain conditions are met. Once both of those blockades are removed, a path will be revealed that will allow the Player's to proceed to the final room.

This is another very short area. Here, the Player will enter a Mini-Boss battle with the Bone Golem. After it's destroyed, the path to the switch will be revealed, which will remove the second and final blockade, allowing passage to the final room.

The final Area of Relic Maze is where a cutscene plays involving Spade stealing the Kingdom Stone, and it is also where the Boss Fight against the Mantalith takes place.

A Forest Area, likely near the Temple Area where Neera Li & General Gong are met.

A Temple Area, where Neera & Gong are met before the ambush.

The Interior Caves of Relic Maze. This is where Lilac & Carol are seperated from each other during their escape from the collasping cave.

The Outside Area where Lilac & Carol escapes to, and is also where they meet Milla. 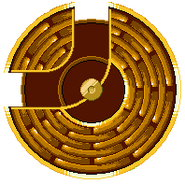 The giant wheel used for a maze-like portion of the stage, can rotate using a series of switches.

The mine cart found exclusively in Milla's story.