Phoenix Highway is the fifth stage in Freedom Planet 2, being part 1 of the Battlesphere Arc. It is an interstate highway south of the Valley Region, connecting the kingdoms of Shang Tu & Shang Mu together.

Lilac & Milla goes after Carol after learning that she took a leave from the team in order to compete in the Battlesphere and win the "GRAND PRIZE", taking Phoenix Highway as their route to Shang Mu. Meanwhile, a ticked off Lady Neera accompanies the girls, having been convinced by Lilac to see the situation as an opportunity to recruit the arena's champion: Captain Kalaw.

The stage transitions through three different areas. The first part takes place outside Shang Tu, the second going through a cave under a construction, and the third showing Shang Mu and the various attractions of Zao Land.

Several gimmicks are shown throughout the stage. These include dash rings that boost the player as well as trick ramps. Also on the stage are certain holograms that switch around certain platforms when passed through and large drills that can burrow through certain parts of the stage. The drills can also be used against the end stage boss.

Lilac atop one of the many drills in Area 2.

Discord, the End-Boss of Phoenix Highway.

The End-Boss defeated, with its Power Core released and its Star Card left behind.

Phoenix Highway as seen on the Beta Valley Region Map 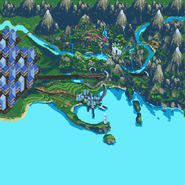 Phoenix Highway as seen on the Updated Valley Region Map