View source
"Get in there, find what you can, and leave. Do it as quickly as possible."
- Neera, instructing Lilac on her Mission

Pangu Lagoon is the 7th Stage for Lilac in Freedom Planet. It is a long-abandoned waterfront near Shang Tu, and appears to have been the former civilization of the Ancient Dragons of the Before Time, featuring collapsed houses and other decaying structures. There are also traces of Lord Brevon's machines found here, left behind from a very long time ago.

Following her encounter with Lord Brevon, an injured Lilac is arrested by Neera Li and taken to Shang Tu, where the Magister gives her a chance for redemption with a mission. After her injuries were healed, she is sent to investigate a nearby lagoon in search for clues on how to defeat Brevon and his Army.

The Player starts off with a basic straightforward path. A Sunfloris is the first enemy the Player will encounter, with a couple of Stingers following afterwards. Although the path splits into multiple layers, there is really only one way to go. Spinners can be used to obtain treasures on the higher platforms. Halfway through the area past another Sunfloris, Lilac will need to use a Time Gate to Dragon Boost up a large wall, then afterwards using the next Time Gate, Dragon Boost over a large gap. The next area is shortly afterwards, past another Sunfloris and two pits. (Lilac can use another Time Gate located after the gap to boost straight through here.)

Strange masks and ancient signs can be seen in the background. Immediately upon entering, Time Gates must be used to advance upward. A shield will be waiting at the top. More Time Gates and enemies litter the rest of this area. Near the higher path, a Bow can be located and used to gain speed. Once again, staying on the upward path will reward the player with a few more treasures and shields. Continuing straightforward on the upward path (past a handful of enemies) another Bow can be located. Using this Bow will break a nearby wall containing a secret cave which houses a Star Card and a 1-Up. The springs nearby will launch the player straight upward on a bridge towards the next area (which is located on the right).

This area is relatively short. A Bow near a platform start off the area, and is required to break the next wall. There are also vines that lead up to a Treasure Chest and the Stage's Tao Stone. Near the end, after Dragon Boosting up a wall, all five Shield Crystal Variants will be available to the Player just before the next area (with some more unique markings in the background). Lilac must use the hanging bar located directly above the door to proceed into the next area.

Now inside the ruins, the player must take care not to get lost, as it is more narrow and maze-like compared to the previous outside areas. Teleporting blocks are the first new obstacle to encounter. Trampolines bouncing a mid-sized cube are also another new obstacle. Near the end of this area, huge swarms of Stingers appear in massive quantities (along with a Stinger Hive at the end).

Immediately upon entering, the player will encounter a large chasm (with a few Terreons below) along with many teleporting blocks. Timing jumps carefully is necessary, otherwise the player will have to face more enemies on the lower path. Past another Bow, another swarm of Stingers and Hives will reappear. After traversing another teleporting block pattern, the following new obstacles will appear in these narrow hallways. Hanging swords will fall towards the floor when approached. Near the end, clockwise-spinning ball and chains will try to harm the player. These are the last obstacles encountered right before a straight diagonal drop towards the next area.

Just like Area 3, this area is also relatively short (however, this area is more straightforward by comparison). Quick reflexes will avoid the hanging swords upon entering. Two Terreons surrounded by a handful of Crystal Flowers will try to impede the player's progress up a large wall. Although they follow her, they cannot jump high enough to get over the large wall. Be advised though, the shockwaves they send out upon landing can still pass through the large wall. After passing a Life Flower, a Time Gate located in front of the player will be required to pass through a hall filled with spikes. The final challenge will be to carefully use a Super Dragon Boost to reach a door handle located in a vertical shaft high up in the center of the room above the closed door in the background. This is done by using a Time Gate to launch Lilac upward into another Time Gate located above said door, then using the remaining two boosts to accurately aim upwards towards the door handle. The last area then immediately follows...

As the Player enters through the door, they'll find themselves falling down into a wide open area with a few Time Gates and vertical half-pipes at the end of both sides of the area. After wandering around for few seconds, the Stage's Boss, the Holodragon, will appear from the shadows, much to Lilac's shock and surprise, and the sound of its roar begins the boss fight. The Player can use the Time Gates to obtain Dragon Stars to damage its weak points and to avoid its attacks more easily. Once defeated, the Holodragon will begin to explode, revealing that it was (as its name implies) a hologram projected by Pangu, who falls to the ground due to being damaged, completing the Stage.

Time Gates are blue orbs that make up rings, and are exclusive to this Stage. Passing through one will spawn a Dragon Star that will orbit Lilac until it is used up. With a Dragon Star, Lilac's standard Hair Whip attack will be able to fire a short range projectile that looks similar to Neera Li's Ice Lasso, but without the freezing effect. It will also super-charge Lilac's Dragon Boost, even enabling her to use a standard Dragon Boost afterwards. Once the Super Dragon Boost is used, the Dragon Star will disappear.

There are certain areas where Lilac must chain a Super Dragon Boost with a standard Dragon Boost to proceed, with a tall room before the Boss Fight which has Lilac Dragon Boost up to a very high ceiling in order to access the last area. 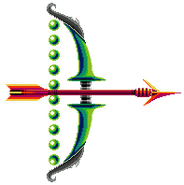 One of Two Stone Doors Lilac must pass through, can opened at the pull of a handle.

Vanishing blocks that appear in the inside cave of the Ruins.

The inner Caves where Pangu resides and shows Lilac a holographic message.
Community content is available under CC-BY-SA unless otherwise noted.
Advertisement