Start a Wiki
watch 01:36
'Freedom Planet' - Character Trailer
Do you like this video?

http://freedomplanet.galaxytrail.com
A crisis has befallen our world. For centuries, we have depended on the Kingdom Stone... but its strength is fading. It cannot keep up with our growing demand for energy. The Prince of Shuigang, poisoned with madness over the death of his Father, has spread machines across the land to steal energy from other Kingdoms. Tensions are growing, and I fear that war may be inevitable.
- The Magister, narrating the plot of Freedom Planet

Freedom Planet is a combat-based 2D platformer and the first full-scale game from independent developer GalaxyTrail.

The player can choose between two game modes in the main game: Adventure mode and Classic mode. Adventure Mode offers the full experience with fully voiced cutscenes. Initially only playable as Lilac or Carol, version 1.20.6 introduced the ability to play as Milla.[1] Milla is unlocked after clearing Relic Maze for the first time as either of the two. Classic mode is nearly identical but removes most of the cutscenes for a more streamlined experience. Clearing a save file in either of the modes lets players select from all stages.

Optional game modes include Time Attack, where all of the unlocked stages can be played again, and the Shang Mu Academy, where each character can go through a series of target smashing stages. Mahjong, a small mini game, can be unlocked by collecting all Star Cards in any of the stages. The Academy and Mahjong are accessed through the Time Attack menu. 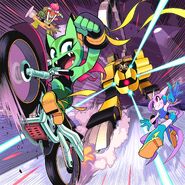 The back cover of the Nintendo Switch box.
Add a photo to this gallery

Retrieved from "https://freedomplanet.fandom.com/wiki/Freedom_Planet?oldid=19912"
Community content is available under CC-BY-SA unless otherwise noted.