This article is all about the development of:

Freedom Planet began development around 2011 in the form of a Sonic the Hedgehog Fangame filled with typical Sonic Game elements, but it was decided to be changed in order to become a commercial title. [1] The Game was developed using Multimedia Fusion 2 and is powered with a Sonic fan game engine called Sonic Worlds, with version 1.2c as its base, later including features from version 1.3 and above.

Over the course of production and development, many characters received huge overhauls in their personal designs and characteristics. All Characters eventually received Cel Shadings as well.

Over the course of the development, Strife changed the names and order of the stages. Initially, the game only was supposed to have five stages, but they increased to ten finished stage, with five other (known) ending up scrapped. [8]

A majority of soundtrack also either went completely unused, or received upgrades and/or overhauls.

In addition there also exists these three soundtracks discovered in an old Alpha version of Freedom Planet. They have since been removed and only currently exist in an Alpha build only Strife herself has access to:

It was originally possible to change the color of Lilac's clothes, Carol's scarf and Milla's hair/bracelets in five different colors for each, resulting in alternate Color Palettes for the girls. Milla also has one unused costume.

Present in build 1.13.4 up to build 1.15.5 was a debug character select, which allowed to select all five characters and between five different color palettes, each for Lilac, Carol & Milla.

Hub World Areas were originally planned but scrapped. In addition, the soundtracks for some if not all the scrapped HUB World Data still exists within the files of Freedom Planet.

The concept of HUB World areas is confirmed to make a full return in Freedom Planet 2.

Lilac's Treehouse at daytime. It's used as the location for cutscenes but isn't normally accessible. Originally, it was meant as a hub area in which the player can save their game and look at the special items (most likely the codecs) that have been collected.[11]

A bit of the area can be explored. It's possible to go inside the treehouse and enter the living room but it's not possible to go upstairs to the bedroom.

When the area as entered with anyone other than Lilac, she can be seen sitting outside on a bench next to the bridge by the treehouse. Talking to her triggers a voice clip spoken by the player (carol_hililac as Carol and milla_hililac as Milla), with Lilac answering with another voice clip (lilac_whatsupcarol and lilac_hellomilla respectively).

Nearly identical to Lilac's Treehouse (Day), but at nighttime instead. Torque in his shellduck disguise along with his tent can be seen in the left of the screen.

The following unused Voice Clips relate to this Area:

Hedgehog Lilac's voice recording had much lower audio when compared to Dragon Lilac's.

In addition, the following dialogue was either removed, altered, or never implemented into the final builds[12]. Regardless, the voice recording for most, if not all, of the removed dialogue for the characters still exists: [13]

(Scene between Lilac and Carol)

(Scene between Lilac, Carol and Milla)

(while the heroes go riding into battle)

(Scene between the heroes & Spade)

(after the fight against Mutant Milla)

(later scene after the Kingdom Stone's new form was revealed)

(before Torque's rocket lifts off)

Over the course of some Beta/Pre-release Demos seen, there have been numerous enemy design changes as well:

An enemy character labeled as Shang Mu Mercenary appears in a few Prerelease screenshots of Freedom Planet, primarily the early beta/demos where he is seen driving a plane and the Shang Mu Caravan. Unlike most other scrapped characters this one has quite a few sprites associated with it such as running and piloting animations. It is also currently unknown if Shang Mu Mercenary was the character's actual in-game name around the time of its development. The Shang Mu Mercenary naturally resembles a another scrapped character (see below) and a Shade enemy, most notably the Shuigang enemy pilots. Eventually the planes the Mercenary piloted were replaced with the Shuigang Helicopters seen in the final.

Base idle sprite of the so-called Shang Mu Mercenary.

An unused idle animation. In the demos he is usually seen inside driving the Shang Mu Caravan.

Alternate idle sprite. Here his eye takes on a different look (shorter pupil). Used when he is expressing panic in early demos.

Alternate walking animation where his eye is expressing a panicked look whilst walking.

His original Red Airplane, first used in demo 1.0 and was used until version 1.2.

The original red plane variant of the animation for the unused cutscene.

Piloting an green Airplane only seen in demo versions 1.3 and 1.4.0. Similar looking in design to the final airplane Torque eventually pilots.

Shang Mu Mercenary piloting his green plane within the background of Dragon Valley. Would've been used in that stage's unused cutscene.

Besides the aforementioned sprites above, some sprites were completely changed in later builds and releases:

In the August 4th prototype, all monitor power-ups were finalized, but not their shape. Eventually, the five shield power-ups and the invincibility were redesigned in the final release. The Crystal Box was completely reshaped differently from the others.

Potions can be found, but are ultimately unused. There are five total, and each potion color corresponds to a Shield Crystal of the matching color. Interestingly, the concept idea is reused for Freedom Planet 2.

A handful of leftover objects remains[14]: 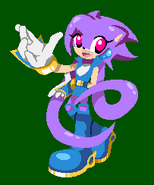 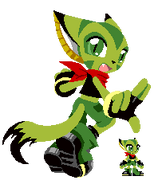 An image of Torque from the Kickstarter Campaign.

Concept art of Serpentine as a Slug. 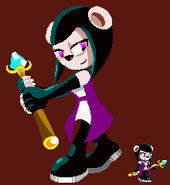 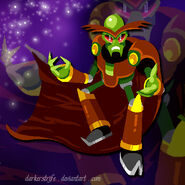 Lilac in Dragon valley shown with her Yellow color palette.

Early screenshot of the Version 1.0 demo build. Featuring Beta Lilac and the Wretchnid.

Another old logo, this time with Japanese styling text.

Unused warping effect intended for use with the title screen.

Extremely Early Screenshot predating the earliest footage of the game.

A widescreen test from a Build between NGIN and the SAGE Demo.

A Screenshot of the NGIN build.

An Early Screenshot of then Sky Battle, note the timer at the Bottom. 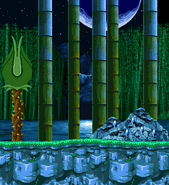 A Resource test of Jade Creek. 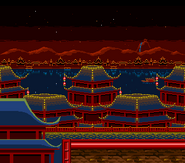 A Test for Fortune Night's background, featuring less detailed graphics and an orange sky. this version predates the SAGE demo. 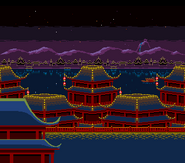 The same resource test for Fortune Night but with the final palette.

Another Early title screen, the background uses a very dark blue instead of black. 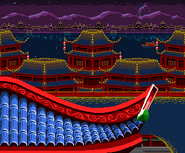 A later resource test for Fortune Night, showcasing details closer to those of the final game's version.

A screenshot of an early version of the mall entrance in Fortune Night.

A compilation of screenshots of a build prior the SAGE demo, note the Sonic style water surface and ACT titlecard

Screenshots of Dragon Valley from a build after 1.4.0, featuring the final version's tileset with the old version's color palette. 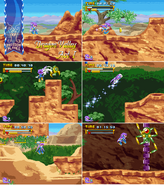 A compilation of screenshots from the fangame build.

Several early character sprites, including scrapped designs for the Magister and the Bird Guard

An idle frame for the Shade disguised Shuigang Soldiers, in the final game they are only seen in the attack helicopters during Dragon Valley's opening cutscene and first section of the stage as well as in Sky Battalion as a midboss.

A Kickstarter sprite of Torque in his iconic pose.

A very early sprite of Neera. Scrapped much early on in development due to its design looking like Sonic the Hedgehog style.

More earlier sprites of then Doctor Brevon. Early sprites show him with a much different Head design.

Early designs for the Life Petals

Beta Sprite of Planet Avalice. The most notable difference between this and the final sprite is the removal of an extra landmass seen on the bottom-left area of this sprite.

Early Designs of Serpentine, Torque and Spade as a Cavy

Some tests for Brevon's finalised design, ultimately the design on the left was used.

Brevon choking Lilac in her old hedgehog design, curiously first found in demo versions 1.4.2 and 1.5.0, long after Lilac's final design had been established.

Early draft design of Syntax seen from the Kickstarter digital artbook. Bottom: Syntax's original design as a floating TV monitor, later reused as the head of a Tankbot enemy. Top: A more finalized design, the tips of the tentacles are slightly different than in the final.

An early idle animation for Neera in her 2nd design.

An early design of Gong and a sprite of an unknown Dragon Character (possibly Lilac's Father).