View source
The Royal Magister has a proposal. We'd like you to help us get the stone back. It's in the greedy little hands of Mayor Zao, in our neighbor city Shang Mu.
- Gong, asking Team Lilac to recover the Kingdom Stone from Mayor Zao

Fortune Night is the 3rd stage in Freedom Planet. It is the Commercial District located in the Kingdom of Shang Mu, and is the home of Zao's Shopping Paradise.

Torque and Team Lilac are tasked by General Gong to act as a neutral party, travel to Shang Mu and negotiate with Mayor Zao in returning the Kingdom Stone. Upon arriving in the city's Commercial District, they encounter Spade and are then ambushed by Serpentine.

The player starts on the rooftops of Shang Mu's Commercial District, next to a gap that leads down to a pair of jump springs, a Treasure Chest and a Fuel Tank, so Carol can obtain her Motorcycle. There are adjacent routes that leads into an area with platforms that move like a ferris wheel and red dragons to ride on. After that, the player reaches a dead end. Then, an enemy ship appears and blasts a hole into the ground, which the player can proceed through. Go down the hole and be careful to avoid the spike floors and the large blocks that fly up and down. Near the end of this area, there's a Bulldozer, which can be defeated or avoided to reach the next area.

This Area has trams that the Player can ride on, as well as multiple jump springs and loops. There is also a speed path that leads to another bulldozer to fight or ignore. Going up the previous speed path will lead to an Extra Life and a cluster of Crystal Shards that spells out "NICE". Proceed up a staircase-like path to reach the end of the Area, where a statue of Mayor Zao stands.

The Player will start to encounter Slot Machines in this Area, in which the Player can get prizes depending on what they roll. Serpentine will continue to pursue our heroes with his spacecraft. Beware the giant laser the craft fires, not only does it hurt, but it will trash the entire area within range (though the destroyed environment may provide alternate escape routes). After making it past a few more enemies, the Player will enter an area where they'll face Serpentine as Lilac, or S.A.M.U. as Carol, Milla or Torque. After defeating one of them, the Player can proceed to enter Zao's Shopping Paradise, with Seprentine in hot pursuit.

As the Player enter this Area, they will encounter zip lines that can launch the Player into the air a few switches that changes the direction of the escalator. There are also disco balls scattered throughout this Area where, if the Player stand near it, they will start dancing, which will earn them the Disco Fever Badge. Hidden somewhere is a secret melody where, if played on a piano, will earn the Player Life Petals, an Extra Life and the Secret Melody Badge.

The Player must climb up a large rotating pillar to get to a zip line at the top. Afterwards, there are a few more enemies, along with slot machines, spiral lifts and dirt spots for Milla to dig. Near the end of the Stage, the Player will face S.A.M.U (first fight as Lilac, second fight as Carol, Milla or Torque). After beating said Mini-Boss, a path will open up leading to the exit. Once the Player Exits the shopping mall, Serpentine will reappear on his Robopanther, beginning the boss fight. As Lilac or Carol, the Player will fight the Robopanther on the ground, with Torque & Milla flying in with a biplane, providing air support by dropping Life Flowers, which will break open upon hitting the ground. As Milla or Torque, they will attack the Robopanther from the biplane, with one of them flying it, depending on who the Player is controlling. Once the Player defeats the Robopanther, the Characters will come together around the remains of the defeated boss, completing the Stage.

Throughout this Stage, there are Slot Machines that the Player can obtain prizes from. They are large, red machines with a roulette wheel and a fortune cookie on top. To use it, the Player has to simply grab and hang onto the pull lever on the right side. Once pulled, the roulette wheel will start spinning, and once it stops, Zao's Jingle will play a the Player receives the selected prize. Each Slot Machine in Fortune Night can only be used once per playthrough.

Fortune Night is confirmed to be a playable track in Super Indie Karts, a racing game that is similar to the Mario Kart Games. This game is currently available on Steam as an early release game and is expected to be fully released in 2020.

An alleyway section of the streets, likely where Team Lilac pursues Spade after being ambushed. 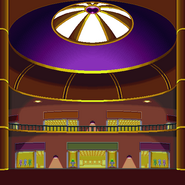 The Interior of Zao's Shopping Paradise.

Shang Mu's Waterfront, where the Sky Battalion can be seen stealing the Kingdom Stone before the Fight with the Robopanther.