Prince Dail is the End-Boss of 2 Stages in Freedom Planet, where he pilots 2 different machines.

In Sky Battalion, Dail rides the Kujacker, a peacock-like robot that he uses to lead his troops into battle.

As the Player returns to Zao's Airship after disabling all the enemy cannons, Dail appears on the Kujacker, attacking the Player from there. It'll fly around randomly, launching an attack afterwards. It's weak point is it's head, which is protected by the blue spheres on it's plumage. Once it's head is damaged, the Kujacker will fly off-screen and attempt to dash into the Player. After its head is damaged 4 times, the blue spheres on the Kujacker's Plumage will turn a shade of red during its 5th and final phase, signifying its near defeat. Once it's defeated, the Kujacker will be heavily damaged (but still flight worthy), forcing Dail and the Sky Battalion to retreat, ending the Stage.

"This is far from over!"
- Dail retreating.

The Metal Shield Crystal can give the Player a big advantage in this Boss Fight, able to protect them from the Kujacker's Electric Attacks.

Angles of the Head, where it turns to face the player.

Upward angles of the head.

The Kujacker's head damaged upon its defeat.

One of the Kujacker's tail pieces...

...and said tail pieces now a shade of red, signifying its final phase and near defeat.

"It's such a shame that you chose the wrong side. Enjoy the last few minutes of your pathetic lives!"
- Dail's Monolouge from atop the Shade Beast

In Battle Glacier, Dail rides the Shade Beast, an eyeless, spherical monster that he uses to stop in an attempt to stop Team Lilac from entering the Dreadnought.

Dail sits on top of the Shade Beast and is protected by a Metal Shield. Before the Boss Fight start, he will monologue, leaving him vulnerable to an attack. Once the Fight begins, The Shade Beast will move it's head left and right, high above the Player and keeping Dail safe. After awhile, it will lower its head to charge up a powerful attack, but also leaves Dail vulnerable to attack. Whenever Dail takes damage, the Shade Beast will spawn Beast Irises to aid in the fight.

"NOOOO! My Beautiful Creation!!!!
- Dail, upon the Shade Beast's defeat

Once defeated, Dail will fall off the Shade Beast and watch in horror as his "Beautiful creation" explodes in front of him. Before Team Lilac can celebrate, Dail attempts one final attack, but is thwarted by his brother Spade, forcing the Prince to flee the battle.

During this Boss Fight, There are 2 dirt spots, so Milla can dig up 2 Shield Crystals: a Metal Shield and an Invincibility Crystal. There is also a Fuel Tank, so Carol can get her Motorcycle if she hasn't already at this point. 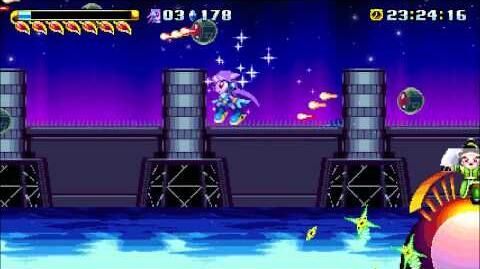