Lindsay Jones
Let me bring you up to speed. The name's Corazon! Captain of the Sigwada and Mercenary Extraordinaire! In the flesh.
- Corazon introducing herself to Neera

Corazon Tea (Cory for short) is the older sister of Carol Tea and a self-employed Airship Pilot, known around Avalice as the "Ace of Flying Aces". She and her crew are hired by Merga to transport troops and supplies with her personal Airship, the Sigwada. A fight between Cory and Team Lilac will occur when they try to stop her from escaping with a deactivated Pangu.

Cory is a yellow-green Wildcat with green stripes, yellow eyes and black patches on the tips of her ears and tail; as well as small yellow marks above her eyelashes. Her outfit is a brown and black pilot suit with white fluffs yellow straps, fingerless black gloves and pilot goggles. Cory also wears a gold chain necklace around her neck.

Let her go! She's off the bandit list. Family Discount.
- Corazon, telling Aaa not to attack her sister, Carol.

Carol: Carol is Cory's younger sister, though the history of their relationship is currently unknown. During the events of the game, Cory will tell Carol to stay out of her business. While the following is unconfirmed, it could be possible that Cory is being protective of her sister, possibly due to her history of doing work for unsavory clients, and she doesn't want Carol to get hurt as a result of her involvement. This seems to be true, as she told Aaa to let Carol go, calling it a "Family Discount". However, Cory will fight her sister if she's left no other choice.

As a skilled Pilot, Cory is capable of flying her own Airship, the Sigwada, which can deploy drone ship to distract the victims while she makes with stolen goods. Along with piloting an Airship, she is armed with dual-barrel pistol and use steampunk fire as a means of combat. Cory possesses feline instincts and is also quick and agile as Carol, as well as sharing similar abilities with her sister, such as rolling and using Jump Pads.

Corazon, at the helm of the Sigwada and ready for action. Art by Tyson Tan 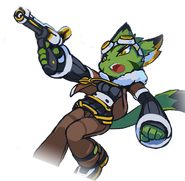 Corazon Artwork
Add a photo to this gallery

Corazon encounters Neera Li.
Add a photo to this gallery
Retrieved from "https://freedomplanet.fandom.com/wiki/Corazon_Tea?oldid=19154"
Community content is available under CC-BY-SA unless otherwise noted.