The Absolution is the Mid-Boss of Battle Glacier and the Phase 1 Final Boss of Final Dreadnought 4.

The Absolution is the personal Starship of Lord Brevon, and appears to resemble a frog-like creature, as it's landing gear doubles as legs. It is equipped with insect-like wings for flight and a single cannon under the bow for combat. From the back view, the Absolution has 6 engines, 2 large ones and 4 small ones.

The Absolution is first seen during the Opening Cutscene of Freedom Planet, where it is flying towards Shuigang Palace, breaking through the floors and deploying Shade Elites to attack the Soldiers.

The Absolution is later seen in Jade Creek with Syntax, who had just captured Torque. As they fly away with their prisoner, Team Lilac attempt to give chase, only to be ambushed by Serpentine, and his Gunship. The Absolution can be seen in the background, flying away as the fight with Serpentine starts.

Later on, the Absolution is seen in the Snowfields, where it attempts to stop Team Lilac from entering the Dreadnought's Refueling Station. After it is heavily damaged, it flies away and retreats into the Dreadnought, where it is repaired and used by Brevon in a Final Battle against Team Lilac. However, it was damaged once more, and it retreats again after Brevon emerges and equips his Power Suit to continue the fight. After the Final Battle, the Absolution can be seen for the final time, escaping the doomed Dreadnought following Brevon's defeat at the hands of Team Lilac.

In Battle Glacier, the Player can make use of Jump Springs to avoid certain attacks, specifically the Absolution's Air Slam attack. There are also Dirt Spot, so Milla can dig up Fire Shield Crystals to provide her with extra protection. In Final Dreadnought 4, The Absolution has 2 new attacks, and it's health is measured by a green column near the Kingdom Stone. It also has slightly less health than Brevon's Power Suit, but loses one bar when taking damage. 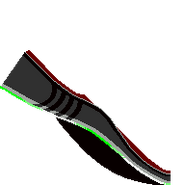 An older variant of the bottom portion of the ship... 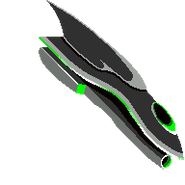 ...as well as the top of the head. Both are silver/grayish in appearance.
Add a photo to this gallery
Retrieved from "https://freedomplanet.fandom.com/wiki/Absolution?oldid=21727"
Community content is available under CC-BY-SA unless otherwise noted.